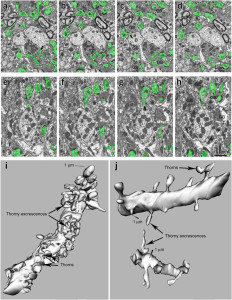 The FT reports on a recent study where researchers have identified a key trouble spot in the hippocampus that disrupts neural networks.

Down’s syndrome is the most common genetic form of intellectual disability, caused by an extra copy of chromosome 21, but neuroscientists are only just beginning to understand how this disrupts neural networks in the brain. Now scientists at Bristol University and University College London have identified a key trouble spot, using mice genetically engineered to mimic the human disorder. It lies in the hippocampus, a central hub for learning and memory in the brain.

Using a variety of approaches, including high-tech microscopy and nerve cell recording, the researchers discovered abnormalities in synapses — cellular junctions — in neural networks within the hippocampus. So-called dendrites, branched projections from neurons that propagate electrochemical signals, have a much smoother and less complex shape in Down’s syndrome mice than in normal animals. In particular, they have fewer of the “thorns” that grow out from the dendrites to receive signals from other neurons.

The result is unstable information processing by the “place cells” that form maps of our environment and underpin the formation of memories. “The wiring diagram of the brain is so massively interconnected that we need to consider how even subtle changes in one part of the brain can cause trouble for other nodes of the circuit,” says Matt Jones of Bristol, lead author of the study which is published in Nature Neuroscience.

The paper was published in Nature Neuroscience: Hippocampal circuit dysfunction in the Tc1 mouse model of Down syndrome